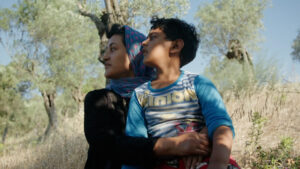 Instead, you get to know an incredibly inspiring woman. Nasim lives on the edge of the enormous camp in a makeshift shelter. You can see how she lovingly cuts her son’s hair and how she teaches children in the open air. It creates space in which – despite everything that surrounds them – they still can be children.

This filmic portrait of the Afghan woman Nasim is not a film about a helpless woman on the run, whom we pity but still do not help. Of course, one can see the disgrace of the camp. Fires, homelessness, despair. A demonstration by Greek fascists. However, one does not just see a person helplessly exposed to these events, to one’s own fate. That would once again undermine the refugees’ humanity. The film doesn’t make it that easy for us.

The film “Nasim” is the polarity of “fast journalism”, which aims for pity instead of compassion. It portrays Nasim’s everyday life and that of her family in a compassionate, human way. The directors Arne Büttner and Ole Jacobs manage to leave you with hope. Hope for the people who are still living in camps under the most adverse conditions on the external borders of Europe. Hope that this cinematic portrait will finally inspire us to empower those in need. To listen to them. Just like the movie “Nasim” does.