“What is the point of the film?” asks a passer-by. “I don’t know myself,” answers Pawel – though the question is not wrongly asked as at the beginning of the film “Balcony Movie” one wonders what do these people have in common. On the one hand, they all walk by Pavel’s house and engage in a conversation with the filmmaker from the neighbourhood; on the other hand, they share a lot with someone who is a stranger.

Thematically, it becomes apparent that everyone is just trying to find their own way in life and love. The audience gets to know a wide variety of personalities: the crazy diva of the block, the melancholic old lady, the initially homeless Robert and countless others. 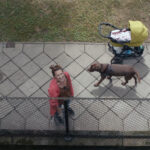 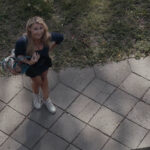 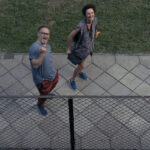 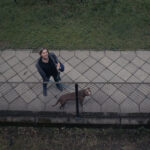 The film shows a fascinating cross-section of the population in Warsaw. Different ways of life are revealed, and thus, the change to modern and tolerant society is made visible in an authentic way. The story of each individual is picked up, provoking a share of goosebumps and outbursts of laughter. The chronology is framed in one year as the director not only shows the conversations with random passers-by but also takes the audience through all four seasons.

Just as the janitor removes leaves, snow and dirt from the sidewalk, the film also gets rid of typical clichés and could hardly combine more points of view.

“I’m making a film from the balcony,” Pawel calls out. “What’s it about?” asks the passer-by. “About life, can we talk about it?” – this is how most of Pawel’s conversations begin.

At first, passers-by are confused, but later, regulars come to Pawel just to chat with him.  This friendly atmosphere and some highly personal stories characterize this quite humorous film.  The whole movie looks for an answer to the question “What is the meaning of life” but everyone has to find this answer for themselves. The film only reveals as much – “Life is the meaning.”