“Before I started making the film, I never met a person with down syndrom.” This is what Martyna Peszko, director of the film “Revolution 21”, told us. Unfortunately, many people in Poland and around the world feel the same way. For several years now Martyna Peszko has accompanied Teatr 21 in Warsaw. 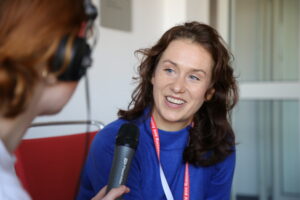 The ensemble is staging a play inspired by a 2018 protest in Poland, in which people with disabilities demanded more support from the state. They kept up for 40 days in the Polish parliament, but to no avail.

It is all the more fascinating to witness the way the actors transform their frustration about not being heard and taken seriously into physical and expressive scenes. They are musically supported by a three-piece jazz band.

In an interview Martyna Peszko told us more about her work with the people at Teatr21.