The light is switched on. The dark room takes on contours. We are in a warehouse. Everything is lined out with shelves from which Ikea bags sill out. They are filled with clothes. 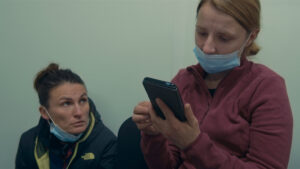 The two protagonists, Kornelia and Karolina, are standing in front of us. They are activists from Poland. They try to provide refugees who want to flee from Belarus across the border to Poland with food, water, clothes and medicine.

But the situation is complicated. Belarus uses the refugees as a means of exerting pressure against the EU and Poland. Poland is actually supposed to provide humanitarian aid, but is more concerned with protecting its borders. They let the refugees wait behind the border. There is no help for them even when it is freezing cold. In contrast, the Belarusian officers force the migrants over the border. It is reported, that the migrants get the choice between death in Belarus and escape to Poland.

The two protagonists of the film “Border Conversations” are part of a group, that does not want to leave the migrants helplessly behind. They want to provide humanitarian aid. The film is about their attempts to get in touch with refugees and care for them. 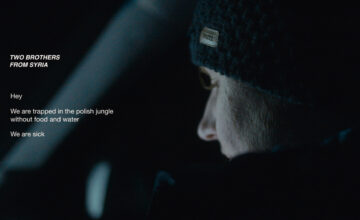 We learn about their attempts to get to the refugees and to help them through displayed chat histories. These are very emotional, for example when the question: “How are you?” is only answered with: “We are dying!”

The film shows that the activists often do not achieve what they intend to do. Some people do not trust them, with others they lose contact, still others are discovered by the border police. You are taken on a very emotional journey, as the director does not leave out how the activists themselves despair of their helplessness. For example, they cannot rescue a mother with a 1.5-year-old child because they are in the border zone. This makes Kornelia cry and one feels very affected oneself.

Accompanied by sad music, the end shows tents at the border between Poland and Belarus. In the background you can see a huge barbed wire fence behind which you can glimpse the police lights. The camera pans and you can see tents all the way to the horizon. Campfires are burning everywhere and big crowds of people are sitting in front of the tents. The images are very moving.

I was very taken by the film. I sat speechless in the cinema for a few minutes and had to digest what I had seen. Afterwards the cinema was very quiet as well. I thought the film was really good because it took me away and touched me emotionally without any posed situations or spoken text.

In the film discussion with the director and the activists, I was also taken away by Karolina’s sentence. She said: “We only make the wrong decisions when we help!”