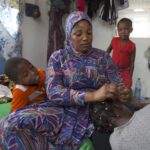 Leaving home and family behind, Fati takes the difficult and dangerous journey to Europe to give herself and her children a better future.  When she arrived in Italy, however, a lot was different from what she expected – a lack of prospects, racism and concern for her children finally drove her to the decision of returning to her home country.

There she is viewed by those around her as a failure and is more often criticized than understood. In her film “Fati’s Choice”, Fatimah Dadzie gives Fati space to share her fate and shows impressions from her environment. In the interview, we talked about the making of the film, broken dreams and how Fati is doing today: